Game of Thrones must be expecting some thrilling action from the dragons in the 8th and Final season of Game of Thrones, spoilers, and other starters yet to come out in the News as the shooting of Epic Battle just wrapped up. Game of Thrones Season 8 Epic battle took whopping 55 nights to shoot and it must be a battle of battles.

A recent Thanksgiving note has been circulated by the producers of HBO covering 55-night 3-location shoot for the season 8.

Assistant director of Game of Thrones (GoT) Jonathan Quinlan took an image of the letter from the “Producer Types” and posted it on his social media account (However, the snapshot has been deleted from the account now). He said, “55 consecutive nights, 11 weeks and 3 locations. You will never be able to see anything like that again.”

The screenshot of the note was taken by a famous blog focused on releasing spoilers, news, and updates about the season GoT.

For enduring 55 straight nights. For enduring the cold, the show, the rain, the mud, the sheep shit of Toome and the winds of Magheramorne.

When tens of millions of people around the world watch this episode a year from now, they won’t know how hard you worked. They won’t care how tired you were or how tough it was to do your job in sub-freezing temperatures.

They’ll just understand that they’re watching something that’s never been done before.

And that’s because of you.

However, 55 nights is too much for a television show just to shoot a single battle, however, the time it took to shoot the battle shows some really epic scenes in it, we don’t know the details about the battle yet, but all we know is its shot in Toome and Maghermorne in Northern Ireland. It might be a WW3 of bloodshed in the entire GoT.

The next year in 2019 you will know all about it with six episodes in the final 8th season of GoT. 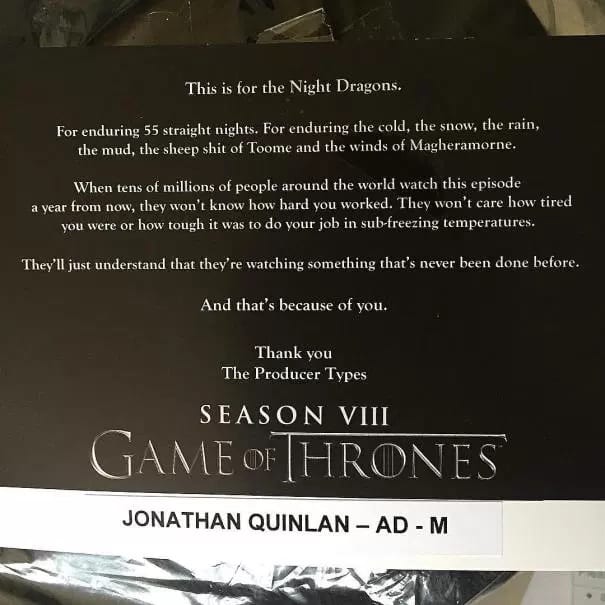 1 day ago Muhammad Usman
We use cookies on our website to give you the most relevant experience by remembering your preferences and repeat visits. By clicking “Accept”, you consent to the use of ALL the cookies.
Do not sell my personal information.
Cookie SettingsAccept
Manage consent