We can expect now Google to announce the flagship Google Pixel 3 and Google Pixel 3XL quite soon, the phone carries Qualcomm Snapdragon 845 under the hood, the chip is said to have 8 cores and clock rates of up to 2.8 GHz, in terms of performance Google Pixel 3 and 3XL would be far superior to its predecessor. However, Google has not changed the 4GB RAM as it is the same as the predecessor.

There are many critics that are questioning Google for this approach, saying that Google hasn’t changed the 4GB RAM since its inception whereas other smartphone makers like Huawei and Xiaomi are continuously stacking up the RAM of their flagships.

The benchmark results show 2400 points on a single-core test of Pixel 3XL, and in multi-core tests, it goes over 8300 points. However, these numbers are slightly lower than other flagships available on the market. The code name “Crosshatch” in the Geekbench database confirms that it is Google Pixel 3XL because Google pixel 2 and 2XL had this code name.

Google Pixel 3 XL would be running on Android 9.0, and it will sport two front cameras, Google may also introduce a notch which is still a controversial feature in Google’s flagship.

Google hand-picked 1000 good employees from its previous partner HTC last year to form a highly experienced team of smartphone developers, according to the sources Pixel 3 production will be done by Taiwanese manufacturer Foxconn.

The Android ‘P’ 9.0 is expected to be released on August 20, it is after then Google may officially launch its in-house flagships but still, it’s a speculation. 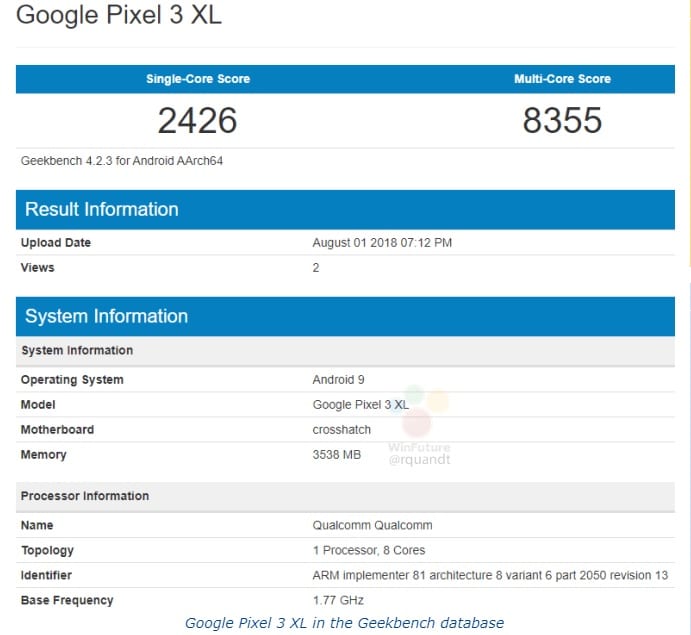 5 Good Reasons Why Every Startup Should Start Blogging

Older Ubisoft games: Online services for Anno 2070 and 14 other game titles will be terminated

2 days ago Mark Goodman
We use cookies on our website to give you the most relevant experience by remembering your preferences and repeat visits. By clicking “Accept”, you consent to the use of ALL the cookies.
Do not sell my personal information.
Cookie SettingsAccept
Manage consent