As the Mobile World Congress (MWC) 2018 coming closer and all the mobile companies are warming up for to showcase their upcoming products in the show. Before that, Nokia 7 Plus is spotted with 4GB RAM and 660 Snapdragon. Nokia is also under the spotlight what the company is bringing to the event.

Nokia launched its Nokia 7 model in October 2017 and now it could be the best time to upgrade the device with some more powerful features. Nokia 7 Plus with little specifications has been spotted on Geekbench, dubbed “Nokia 7 Plus” also show slightly larger display.

Nokia 9 May beat every smartphone in the Market

However, the listing doesn’t provide all the specifications of the phone, if that’s true, you can expect Nokia 7 Plus will be powered by Qualcomm Snapdragon 660 chipset with 8 cores cloaking at 1.8GHz. The previous Nokia 7 came with 630 Snapdragon chipset which is now expected to be upgraded in Nokia 7 Plus. The internal memory of the phone is said to be 4GB which was the same in the previous model with an option of 6GB model, so that could remain the same in Nokia 7 Plus. According to the details, the new Nokia 7 Plus will have a larger screen than its predecessor, the previous 5.2-inches display could be enlarged to 5.5 or even 6.0-inches display. 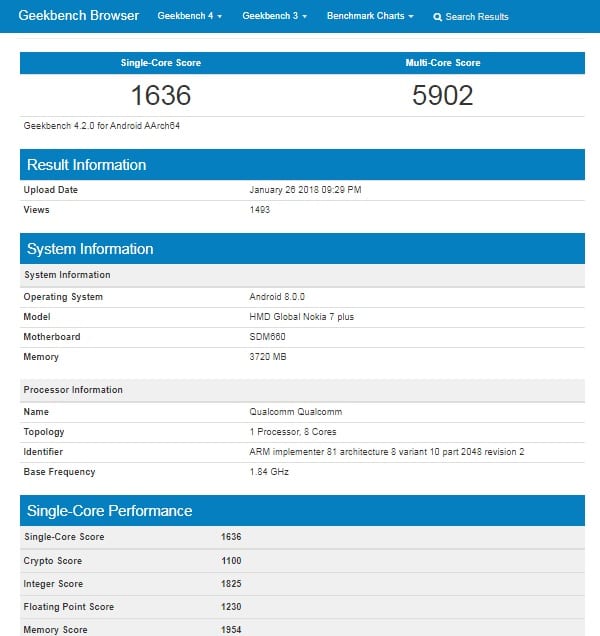 This handset would also come with updated Android version 8.0 Nougat; Nokia has not yet announced and confirmed anything but the company HMD Global made promises to unveil new smartphones at MWC 2018 event. It’s not far though, by the end of next month all the upcoming devices would be unveiled during the MWC 2018 event.

WhatsApp Groups Will Have a Waiting List To Join