One of the most rumored Oppo’s flagship the Find X is expected to launch today according to NDTV, earlier it was speculated that the price would not be any less than $400 but the new suspected price is way more than we thought of earlier.

According to a list posted on Weibo account which compares the prices of different Chinese handsets, Oppo Find X Price could be $700 for the most likely smaller variant 128GB.

Some sources claim that Oppo Find X may not be called ‘Find X’ rather it might be called N5. But as far as the price is concerned $700 for the base variant is highly speculative price, even of Oppo uses Samsung’s curved OLED panels, which adds $100 bill to Oppo the price could be a lot less.

One of the important things to watch is Xiaomi’s and Huawei’s prices, Oppo needs to maximize its sales with the new handset and keeping the price competitive is one of the key factors which would play an important role in sales.

It is better to speculate that Oppo will set the price which is fairly competitive, so we can expect the price a lot less than $700 and higher than $400 somewhere between this bracket. 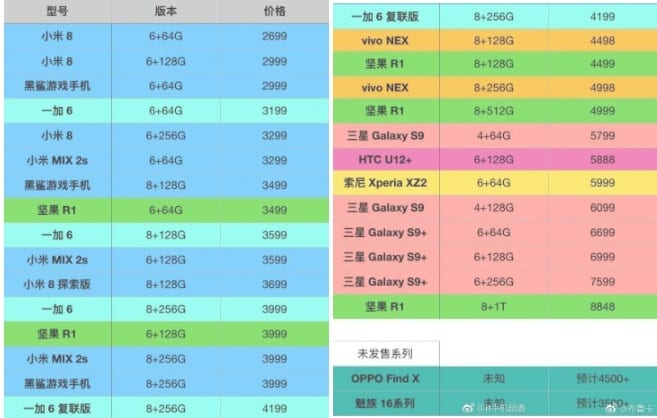 The leaked specifications are almost the same as we reported specifications earlier sporting 6.42-ich 2K+full view display with over 90% screen-to-body ratio. The phone carries Snapdragon 845 64-bit Octa-core SoC along with 8GB RAM and 256GB storage. Some of the latest leaks also suggest that Oppo will announce 128GB variant as well.

Oppo is announcing the handset today, everything that was speculated in the last few months would be cleared, stay tuned for the official unveiling.

3 days ago Sheher Bano
We use cookies on our website to give you the most relevant experience by remembering your preferences and repeat visits. By clicking “Accept”, you consent to the use of ALL the cookies.
Do not sell my personal information.
Cookie SettingsAccept
Manage consent