The MySmartPrice site tells us that the Galaxy S22 Ultra could offer slightly brighter colors than the S21 Ultra. Some details of its technical sheet are also new, such as its 40-megapixel selfie sensor.
3D renderings of the S22 Ultra. As is now customary with Samsung, as the launch of its next series of smartphones approaches, the leaks are piling up. The S22 is no exception, and even less its Ultra model which is shown today from every angle on the site MySmartPrice.

After the colors of the Plus model, here come those of the Ultra. Last year, while the S21 Ultra turned out to be one of the best phones of the year, it can’t be said that the ultra high-end model displayed a lot of color. We had the choice between black, silver, gray, black blue and brown… Fortunately, the S22 Ultra should reconnect with slightly more lively tones. According to renderings shared by “tipster” Ishan Agarwal at MySmartPrice, we should be able to get our hands on a blue green color, as well as a pink color, in addition to the classic black and white. 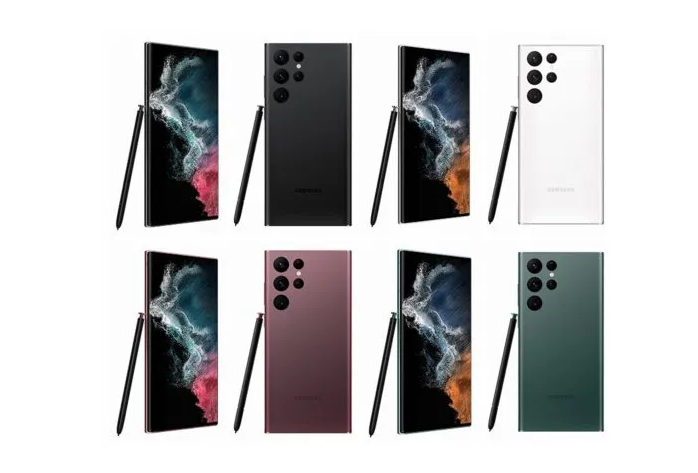 That’s not all that these renders tell us. The resumption by the S22 Ultra of some of the strengths of the Galaxy Note range seems to be confirmed, with the presence of an S Pen on each of the images. It is also expected that the sampling frequency of the latter will increase, from 9 ms to 2.8 ms. For the rest of the design, we see that the disappearance of the photo block in favor of an arrangement of the modules in a drop of water seems to be confirmed. According to MySmartPrice, there would be a 108-megapixel main sensor, an ultra-wide-angle pair with a 12-megapixel sensor and two telephoto lenses coupled with 10-megapixel sensors for the X3 and X10 zooms. He adds, and this is a first, that the front sensor would have a 40 megapixel resolution.

Still according to the tipster of the site, the screen would indeed be an Amoled panel in QHD + with a refresh rate of 120 Hz, capable of going down to 1Hz thanks to LTPO technology. Furthermore, this screen would be protected by a Gorilla Glass Victus+, which would also be a novelty.

MySmartPrice On the weight side, we can expect a nice baby of 228 grams thanks to its generous measurements of 163.3 x 77.9 x 8.9 mm and its 5000 mAh battery . 45W charging would also be on the table, bringing Samsung closer to truly fast charging. As a reminder, Samsung should in principle reveal its next series of flagships around February 8.