Samsung has powered its most recent device Samsung Galaxy S9 with Exynos 9810 according to Androidpit Samsung’s Exynos chips are the second most powerful chips on the market. But according to Android Passmark rating, the Exynos 8895 chip outperformed other CPUs.

The latest Exynos 9810 was way better than the older Exynos 8895 and now Samsung is working on the next generation chip, the Exynos 9820 which is said to be the most powerful chip that could set the new standards.

The Korean giant is working on its in-house Exynos platform, Samsung’s next-generation smartphones would be powered by these chips.

One of the Samsung’s engineer has leaked the information on social media, the chip would be named “Exynos 9820 SoC”, it is also revealed that this SoC will power the Samsung’s 2019 flagship S10 and most probably the next Galaxy phablet after Note 9.

There are no specific details about the chip but it is expected to be built on 7nm EUV process. The SoC is expected to elevate the processing standards including GPU with clocking speed of 3GHz, the SoC is also expected to support 5G connectivity and it will also be power efficient as compared to the previous SoCs.

When Samsung releases its Note 9 this year, we might begin to get more information on Exynos 9820 SoC what actually it offers to the market and its internal configurations. Until then we can just say it would be the most powerful SoC on the market supporting 5G connectivity. 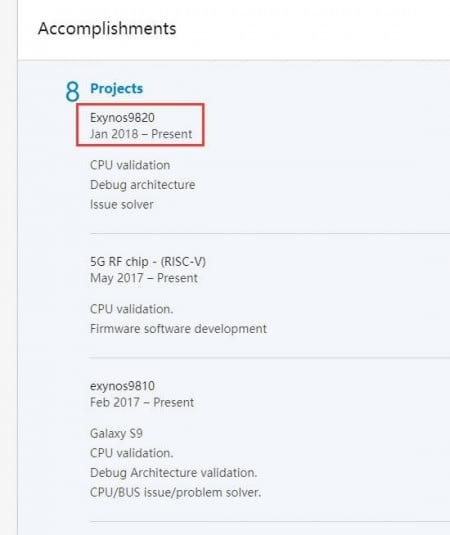 The Galaxy S23 Ultra will be equipped with a new 200 MP photo sensor: Confirmed

Security Update for Windows 11 is here

All about the Microsoft August Patch Day for Windows 10