Top ten companies people want to work for are all renowned names. Right at the top is Space X in Los Angeles, followed by Google, Shopify, Tesla, Netflix, Slack, Atlassian, Hulu, Facebook, and Lyft. The top 10 tech firm’s part of the list are mostly based in California including SpaceX, Google, Tesla, and Facebook. 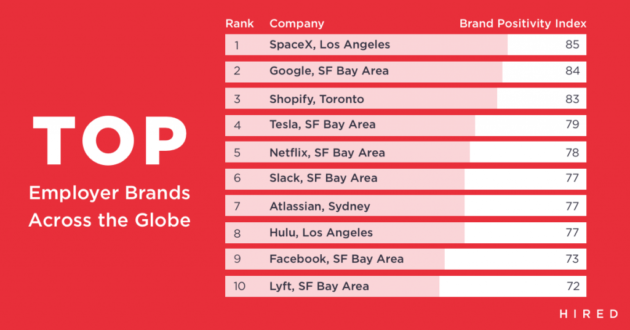 The outliers were an e-commerce firm, Shopify from Toronto and  Atlassian, a software development company in Sydney.

The top ten names were decided on basis of a survey conducted by a recruitment website called Hired.

The respondents of the survey lived in 15 tech areas that are Austin, Boston, Chicago, Denver, Los Angeles, New York, San Diego, San Francisco, Seattle and Washington DC in the US; London in the UK; Melbourne and Sydney in Australia; Toronto in Canada; and Singapore.

As per Hired people are interested to work for firms that cater to what is valuable to them the most, adding that ‘value’ can change as per the preferences of the candidate.

Hired said, “To better understand what candidates most often value in a potential employer, we sought to identify the most attractive companies in tech, by surveying our exclusive pool of qualified technical talent in software engineering, product management, design, and data science to determine which companies interest them most.”

The Pixel Watch has the same chip as Galaxy Watch 2018

Dark Energy Pre Workout Gets Banned: Here Is Why

The Pixel Watch has the same chip as Galaxy Watch 2018

2 hours ago Brain Curry
We use cookies on our website to give you the most relevant experience by remembering your preferences and repeat visits. By clicking “Accept”, you consent to the use of ALL the cookies.
Do not sell my personal information.
Cookie SettingsAccept
Manage consent