Xiaomi becomes the fourth largest smartphone maker globally after beating Oppo during the first Quarter of 2018. The data revealed by Strategy Analytics on global smartphone shipments indicates that, However, Samsung and Apple are still the top shippers during respectively despite the global smartphone market shrinking down by 2.4 percent.

Samsung being top on the list shipped a total of 78.2 million smartphone devices between January and March, Samsung still holds the larger chunk in global smartphone market share and enjoys 22.6 percent of market share, however, the market share was declined by 0.1 percent as compared to last year’s first quarter.

Apple keeps the second place with a slight increase from 50.8 million to 52.2 million units, Apple’s market share increased by 15.1 percent due to this slight increase in the number of shipments.

Huawei despite being barred from entering the US market, still managed to deliver 39.3 million units to the global consumers during the first quarter, Huawei currently holds 11.2 percent market share. 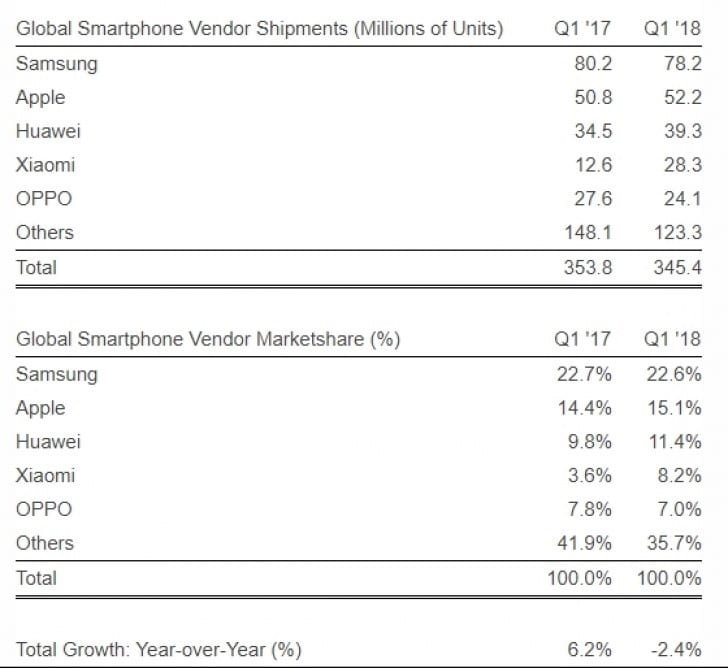 Xiaomi is also expected to achieve its elusive target of over 100 million units in the highly competitive market. But the company has already achieved the significant number of shipments to fuel its final achievement.

The global smartphone market is screening the small manufacturers and the 2 out of 3 phones 66.66% are from the top 5 companies. Xiaomi has outperformed all the smartphone makers in China as well as globally including Oppo and Vivo in terms of growth percentage.