Facebook keeps on playing with its layout and design for attracting more user engagements and interactions, it seems that the tech giant is not stopping at anything when it comes to transforming or bringing in changes.

Recently, it appears that Facebook has quietly removed its well known or let me say the oldest feature, the Ticker, the box that used to appear on the right side of the Newsfeed updating about the activities of friends including their recent likes, comments or generally whatever they are doing on the networking site. 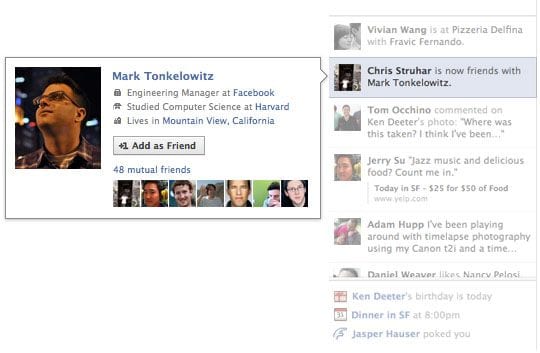 People had been reporting the absence of this feature from their apps since several weeks. Sometime back during the last week, on a thread in Facebook’s Help Community initiated by some user, an authoritative and verified member of the social giant’s help team simply revealed that “This feature is no longer available”, indicating that even any further queries are no more entertained.

It cannot be said with clarity that why Facebook decided to chop the Ticker, but it has been contacted for putting some light on this matter.

Generally, it is not new for Facebook to kill some features that are not much used or are not showing any progress in expected ways or killing one feature to bring light on other.

The Ticker has a history dating back to 2011, overlapping with Facebook for the launch of an algorithmic News Feed. The aim of the Ticker was to give the user a time-based summary of all the activities happening-relating Facebook friends on the social-networking site, to assist one in keeping a tab if one is interested and to make those summary pointers a jump-in point for interactions.

It was a controversial launch as people called it “creeper feed” because of how it quietly keep tabs on people on one’s network. It seems, Facebook wanted to remove it before too, but instead if offered a mute button as an option to turn it off—which also is no more present).

There is a possibility that Facebook removed Ticker as it was a reminder of Old Facebook, but now the social-giant is getting more trimmed and polished about its positioning, so the offer to keep tabs on other people might not be appropriate in view of Facebook’s role today.