According to the latest leaks on Geekbench, Huawei is going to launch its budget midrange smartphone Huawei P Smart 2019 soon. According to the previous FCC documents it was revealed that Huawei P Smart US version would have 3GB RAM but other variants outside the US including China would be sporting 4GB RAM.

As the device has appeared on Geekbench, we know very well from earlier leaks that the phones appear on Geekbench when they are ready to be launched. So we can expect Huawei Smart 2019 launching in Pakistan and other regions soon.

According to the score on Geekbench, the device is running on Kirin 710 chipset, the scores indicate that it is somewhere between the Snapdragon’s 660 and 636 SoC. The score also shows the model number POT-LX1 whereas it was shown POT-LX3 in earlier leaks, this suggests the regional variant, however, It is not clear yet whether Pakistan would receive the 3GB variant of 4GB variant. 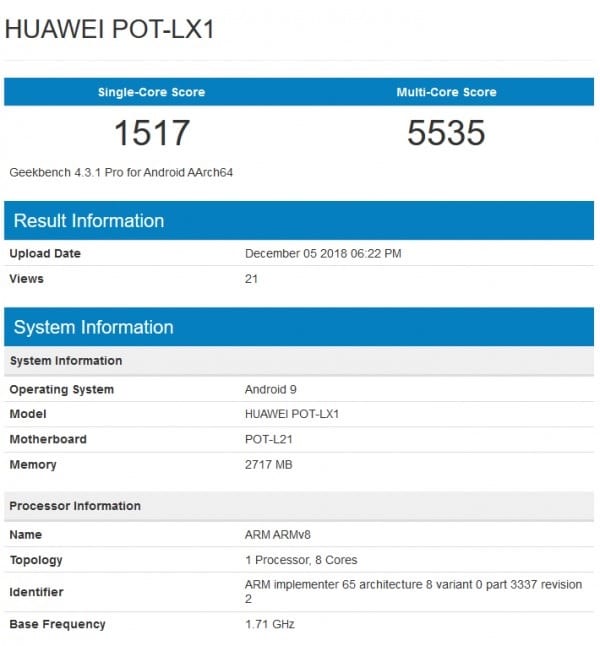 According to the previous documents Huawei P Smart 2019 will be offering 3320mAh battery along with 32GB and 64GB storage options. The phone will also exhibit a tiny dew drop notch for front selfie camera. The phone will have a dual camera at the rear along with a fingerprint scanner.

Huawei P Smart will get a somewhat similar camera like Honor 10 Lite, the 13MP+2MP dual camera at the back and 24MP front shooter. The phone is also expected to come with the price tag of 200 Euros and the price in Pakistan could be around Rs30,000.

It is speculated that the phone will be launched this month in China and later in other parts of the world most probably in January.