The customs officers in China’s southern technology centre Shenzhen smashed a group of criminals who were using drones to smuggle five hundred million-yuan ($79.8 million) worth of mobile phones to Shenzhen from Hong Kong, as reported by the official Legal Daily on Friday.

The related authorities have arrested twenty-six suspects who used drones to fly two, two hundred metre (660-feet) cables between the mainland and Hong Kong for transporting refurbished iPhones costing approximately around 500 million yuan, as reported by the paper in a report on the crackdown by the customs of the two countries that is Honk Kong and Shenzhen.

Also Read: Will Huawei beat everyone to the first foldable phone?

The Legal Daily reported quoting a news conference conducted by the Shenzhen customs on Tuesday that it is for the first time ever that a case of such nature has surfaced in China in which drones were being incorporated in the cross-border smuggling crimes.

The report citing the customs wrote that the smugglers usually do their operations after midnight and only require seconds for transporting small bags containing more than ten iPhones via the drones.

The busted gang could smuggle as many as fifteen thousand phones through the drones across the border in just one night, as per the report. 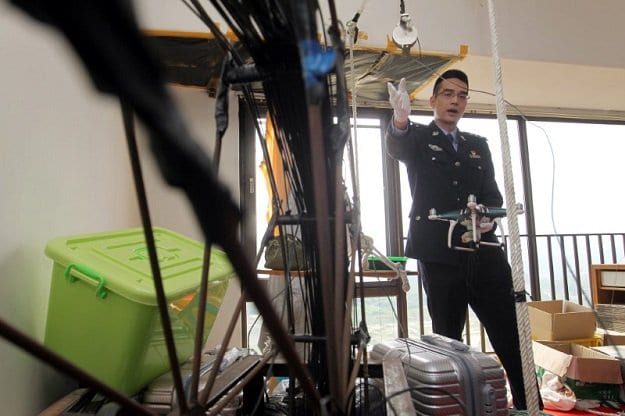 Modifying the use of drones in an appropriate manner and for legal activities has become a significant task for China—the world’s biggest manufacturer of consumer drones.

Last year China published strict rules for handling the incidents related to drones drifting into the paths of aircraft flights, also asking the owners of the civilian drones to get the craft registered up to a specific weight under their real names.

Shenzhen customs was cited by the Legal Daily as saying that it would be closely watching over the new types of smuggling being used with the high-technology devices and boosting their capability with the technical equipment, which includes drones and high-resolution monitors for investigating and catching any smuggling activity.