Facebook Messenger Kids launched passphrases for kids to make it easier for them to add friends. The app is for the kids under thirteen years of age.

The company launched this feature that would permit the kids to requests parents’ approval for new contacts. For using the feature, parents would turn on a setting that would create a four-word passphrase for using to send these friend requests, as informed by the company.

Parents can choose to use this feature, which is not by default.

Once the feature is enabled, Facebook would randomly make a four-worded phrase that would be assigned uniquely to each child. When the child would want to add a friend to their contact list on the app in future, they would show the phrase to the friend to enter in their own application.

Both parents would then receive a contact request from their child and then similarly both would be needed to approve the request before the kids could begin with their chatting. In other words, this could be said that all friend requests still require parents’ obvious attention and confirmation, like before. 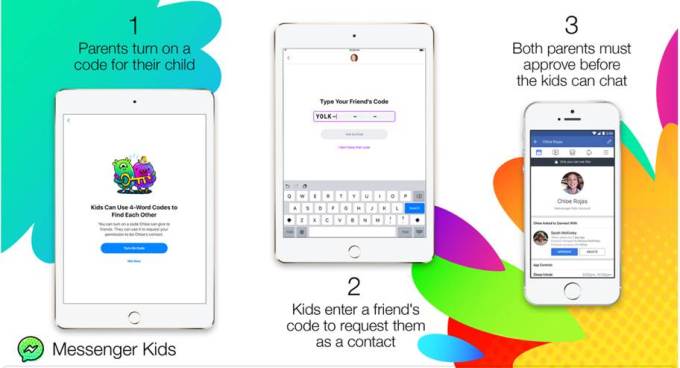 The new feature, however, makes it simpler for the kids to friend one another when their parents are not Facebook friends themselves. This has been an issue with the application, Facebook started addressing the matter in May when it made some changes that no more need parents’ to be friends.

Most parents want to know who their kids are texting with, there are many times that parents’ may be friendly with each other and have seen each other on school functions and activities, but they may not be Facebook friends necessarily.

The passphrase solution would be making things a bit simpler on parents, as the contact requests would be initiated by the kids. Parents would only need to tap on “approve” button for confirming the request or denying it if they find the request to be inappropriate.

The four-word phrase would only be viewable to the kids in the messenger app and to the respective parents in their Parents’ portal.

The passphrase feature has been launched yesterday on the Messenger Kids mobile application.

How to Create an MVP for SaaS Startup