iQiyi is the Chinese video-streaming service in China owned by search giant Baidu stamped an agreement with Netflix to join hands and start services in China, according to Hollywood Reporter. iQiyi also reported 481 million active users which is a huge number as compared to Netflix’s overall users base.

The data below shows the Netflix’s users in the US and Global market. 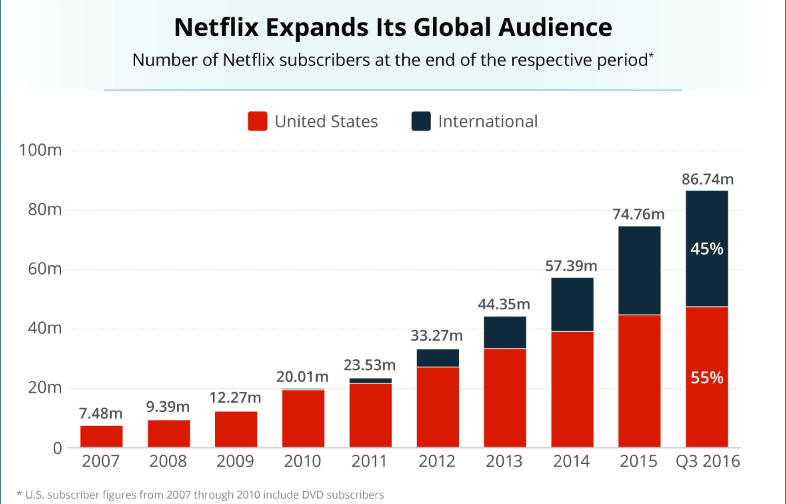 Netflix reported 86.74 million total users in 2016 including 55% US users and 45% global users. But China as reported by iQiyi yet alone has 481 million active users which is five and a half times bigger than the entire Netflix’s consumer base.

Must Read: Apple Plans To Invest $504 million In China

Even if Netflix would be able to grab 1 fifth of the Chinese market it would double its customers and of course business.

Netflix is almost present globally leaving few markets out of the picture including China, this deal would be the beginning of the Netflix’s entry into the markets that are left behind. Robert Roy vice president of content acquisition of Netflix told reporters that the deal will add Netflix’s content in China, However direct relationship in China is still a matter of when and how it will be started. But the company is working on this and would release update overtime.

Netflix took this decision last year to enter into the Chinese market during the following year, the deal is quite attractive for iQiyi because it provides competitive edge over its rivals like Alibaba owned Youku, Tudou and Tencent Video.

It is not confirmed yet what type of content would be released in China and when it will be started however, Netflix confirmed the licensing deal with iQiyi.

Foreign companies like Netflix, Amazon have long been facing issues to work in China due to strict Chinese government laws and policies, Instead companies have been licensing content to Chinese companies rather than starting their own operations in the country.

This deal also have ambiguity whether it would be entirely licensing agreement or Netflix would be able to make its presence in the Chinese market on its own.