After India, Bangladesh & USA, Pakistan is the top freelancer country in the world. A few months back the news circulated that combined revenue generated by freelancers of Pakistan is $1 billion. Now till now freelancers in Pakistan worked on their own. They used to take work from the inhabitants of foreign nations or independent companies in Pakistan, do the work and in return, they were granted money. From their combined effort they took Pakistan to number 4th spot in top freelancer country list.

Must read: How to apply for the e-rozgaar program by Punjab government?

Now the freelancers are supported by the government. Punjab government has started the program called e-Rozgaar to train thousands of unemployed Pakistani youngsters so that they can become free lancers in near future. If Pakistani freelancers have the support of government, quite soon Pakistan will be able to beat US and become 3rd most popular freelancer country in the world.

The reason free lancing is increasing day by day is because companies also look to hire an individual with a particular skill set as Pioneer said:

“For companies hiring freelancers, having access to a global market means having the ability to find the exact skill set they’re looking for, whether that is in marketing, design, business consulting, or programming” 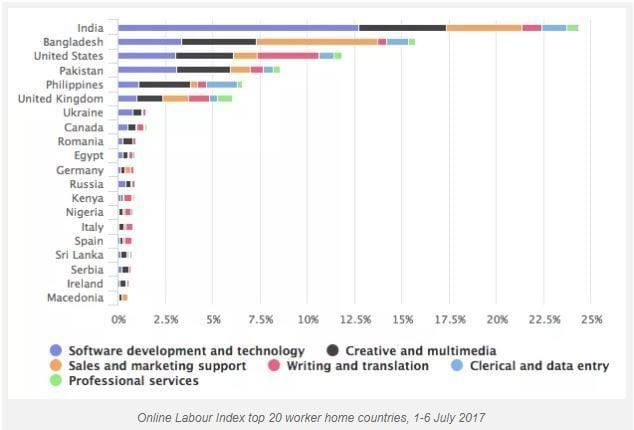 At the moment around 24% of freelancers live in India while 16% live in Bangladesh. U.S does not have that big a free-lance population compared to India & Bangladesh but the market is quite moderate. This market Pakistan can beat. The freelancers are increasing day by day in Pakistan but they do need continuous government support. With that, in no time we will be able to surpass US and gain the third spot.

Google’s adding a new SafeSearch mode to its browser

Zoom laid off 15% of its working staff

Data Analytics: A Comprehensive Guide to All You Need to Know

How To Create, Add, & Edit A WordPress Navigation Menu? Explained 2023