As per report by speedtest.net it was seen that Pakistan recorded highest increase in mobile internet speed in 2017.

It was seen in the Speedtest Global Index that in last 12 months the mobile download speed in Pakistan increased by 56.2%.  Pakistan is followed by India and Brazil whose internet speed in 2017 increased by 42.4% and 27.6% respectively. 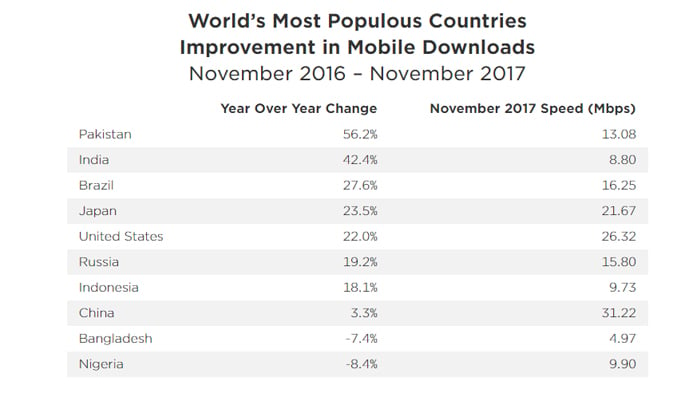 Due to natural disasters some countries face downfall in their internet speed.  Hurricane Maria caused the devastation of Puerto Rico’s mobile infrastructure and its mobile internet speed dropped down by 39.8%. Uzbekistan and Côte d’Ivoire also suffered a decline of 31.8% and 26.1% respectively.

The Speed-test Global Index on November, Pakistan was ranked 89th in its mobile speed for the month. Pakistan came ahead of both India and Bangladesh.

The Speed-test Global Index is an index that compares internet speed data all around the globe on both monthly and annually basis. The data is taken from hundreds and millions of tests taken by individuals all around the globe. Every month this data is updated.

Non-Snapdragon devices are at risk of GPU exploits

Apple Rolls Out iOS 16.1.2 With Bug Fixes And Improvements

Neuralink: Chips In Human Brains, Trails To Begin Next Year

Twitter Blue Postponed As Apple Wants 30 Percent Of The Stake

How does AI help in identity verification services?

The Top Drones in Budget