Samsung has just started releasing an update for its Galaxy A9 Pro smartphones. The Firmware version is A910FXXU1BQHB and the size of the software is 1266.68MB.

Samsung has pushed a major update bumps up from OS version to Android 7.0 Nougat, this is pretty a news for Galaxy A9 Pro users, currently, the update is rolling out to the handsets in China, Malaysia and India,

If you are in any other region and not received an update then be patient, you will get the update in some time, basically, OTA updates delivered to mobiles worldwide is a slow process and takes time to get to all the users. 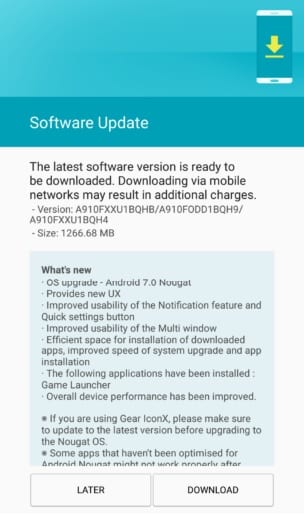 Other than updates interestingly Samsung is pursuing some other motives, during the last event Samsung had, its mobile business head DJ Koh said, Samsung is interested in developing bendable screens, and they are likely to launch bendable phones by next year.

On the other side, Samsung Galaxy Note 8 has been a success so far, Note 8 broke all the previous pre-order records.