Qualcomm is becoming more interested in manufacturing chips for laptops after it has conquered the smartphone market, However, the first ACPC a fully interconnected PC with Snapdragon 835 inside could not ignite a huge market demand. Later Qualcomm introduced the 2.96GHz Snapdragon 850 to compensate for the areas left in the earlier chip.

Now Qualcomm is ready to introduce next-generation processor 8180, the processor appeared on Geekbench which suggests that the chip is not designed for smartphones but rather for laptops.

The processor dubbed “Qualcomm MTP” the chip is tested running Windows 10 on ARM, the word MTP stands for Mobile Test Platform, it doesn’t necessarily mean that the chip is designed for smartphones; the score indicates the memory of 8128MB is also considerably high as compared to the chips used in Smartphones. Also, the size 20X15 millimeters is way too big as compared to the average size of Smartphone chips. Therefore, Qualcomm has developed a new notebook chip as per evidence.

The chip performs quite faster, it scored 1392 on a single core and 4286 on multicore tests. In vertical comparison, the typical running points of Snapdragon on Windows 10 platform were recorded at 911 and multicore 3278 points. Also, Snapdragon has the score while running on Windows 10 platform was recorded at single core 1281 and multi-core 3485. 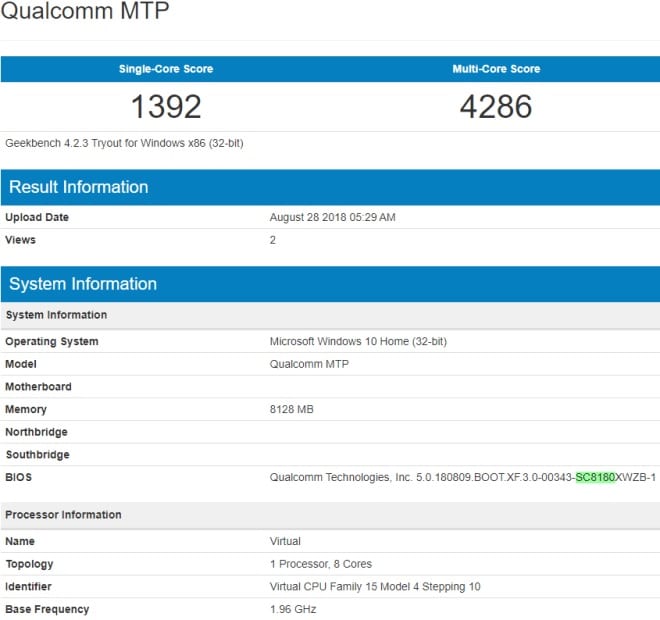 That makes a huge difference for Qualcomm, the Snapdragon 8180 chip will be using 8-core configuration setup and Cortex A75/A76 CPU architecture with the minimum frequency of 1.96GHz. Qualcomm is expected to launch the Snapdragon 8180 chip by next year, the Taiwanese manufacturer ASUS would be using that chip in their new line of laptops, the company is also working on their new device named “Primus”.