Since the market for Android phones is becoming increasingly saturated the big brands are now struggling with their market positioning. The recent data published by Antutu Hong Kong indicates that Samsung smartphones are quite lower in terms of user rating.

The Korean giant would be able to secure 5th place with its phone Samsung Galaxy S8, while Japanese brand Sony tops the list. Sony Xperia XZ Premium is the most loved highly rated smartphone in the Chinese market with rating 96.11 percent.

Sony is still a big name if we consider quality first, the company has recently announced to enter in Pakistani market of 193.2 million population and 140.2 million mobile users.

Surprisingly, Meizu Pro 6 plus comes are the fourth position ahead of Samsung Galaxy S8 with 94.31% and 94.21% rating respectively. Redmi Note 4X is the 6th highly rated Android smartphone in the market with 93.38% user rating.

Samsung makes its second entry in the list with its flagship Galaxy S8 Plus the 7th highly rated Android phone with 92.81% user ratings.

Overall Xiaomi has the most phones in top ten highest rated Android phones, with three entries in top 10 phones. While Samsung and Redmi have two entries each. 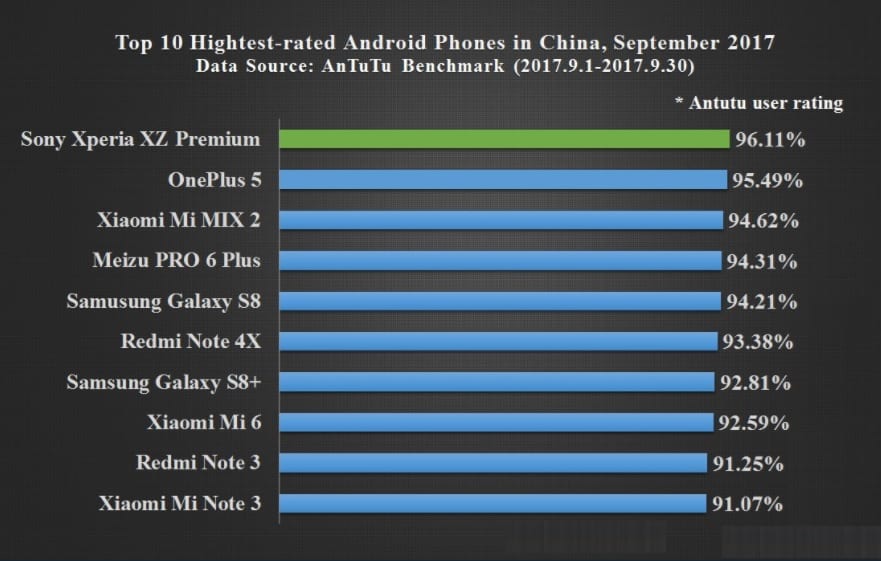 22 hours ago Sheher Bano
We use cookies on our website to give you the most relevant experience by remembering your preferences and repeat visits. By clicking “Accept”, you consent to the use of ALL the cookies.
Do not sell my personal information.
Cookie SettingsAccept
Manage consent