What are the most popular Android phones out there might surprise you after reading the results? The survey conducted by Antutu focuses on the phone performance mainly. According to the report Mi Black Shark outperforms all the android phones on the market as per consumers.

The people who have hands on it can tell the real difference.

It worth mentioning the title “Top Ten Most Popular Android Phones of 2018” is not applicable to the whole world. The survey was conducted in the Chinese domestic market as most of the foreign companies are not very welcomed in China. The results will, of course, differ a lot from region to region. The data was collected from May 1 to May 31, 2018, secondly, the phone got the higher rating as well which have been reviewed most of the times.

Chinese benchmark platform conducts monthly surveys among Android users to know how satisfied they are with their current phone. The results show that Mi Black Shark is the leading Android smartphone.

However, One Plus 6 is the second top phone that Chinese customers love, Samsung Galaxy S9+ comes in the third place for the performance it provides to its users.

Sony Xperia XZ2 Compact got the 4th position this year as Sony could make it to the first position as it did last year. During the survey last year Sony Xperia XZ Premium was the leading handset.

Samsung Galaxy S9 (SDM845) make it to the middle of the list by retaining the 5th position, it could also be the factor that Samsung Galaxy S9 has fewer customers in China as compared to other Chinese brands. 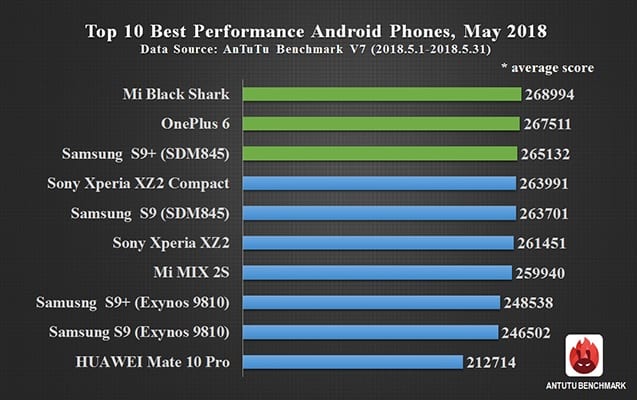 The last man standing on the list was Huawei Mate 10 Pro, finally, make it to the list. Do you agree to the survey results, would they be much different in Europe, America and Asia? Leave your valuable comments below.