A few months back WhatsApp launched the interesting delete feature. It allowed the users to delete a message they accidentally sent to their contacts or a message they regretted after sending. So users could delete them. Now another curious thing has come to light which is that users are not able to delete quoted WhatsApp messages.

WhatsApp Quoted Messages Cannot be Deleted. In group chats, the quoted messages still show in quotes even if you try removing them. Also in private chats, if a user tries removing Quoted Messages they still appear. 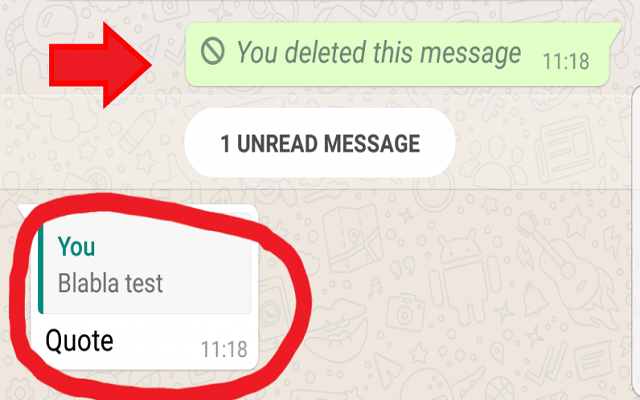 The next time you sent a quoted message to group chat or a private conversation double check if you are sending to the right group or person or not. Make sure you won’t have to regret the quoted message after sending it and then press the send button. In case of any doubt just don’t send it because you will not be able to delete it afterward.

Spanish Android blog Android Jefe said that despite the sender deletes a message, it is still present in the notification log of the device & the recipient can easily view it. The blog said, “What we found is that the messages are stored in the notification register of the Android system. So, it’s just a matter of entering that record to see the messages that the other person deleted.”

For accessing the deleted messages, one has to download another application from Google Play Store called the “Notification History”. After that, the user needs to search the messages in the Android notification register.

Furthermore, WhatsApp has also confirmed that if the user wants to delete a message it can only be done within the 7 minutes after the message is sent.