It’s been a complaint launched by dozens of YouTube users that when they type “how to have” in the search bar of YouTube website or app it autocompletes the phrase by suggesting some gross and disturbing suggestions. 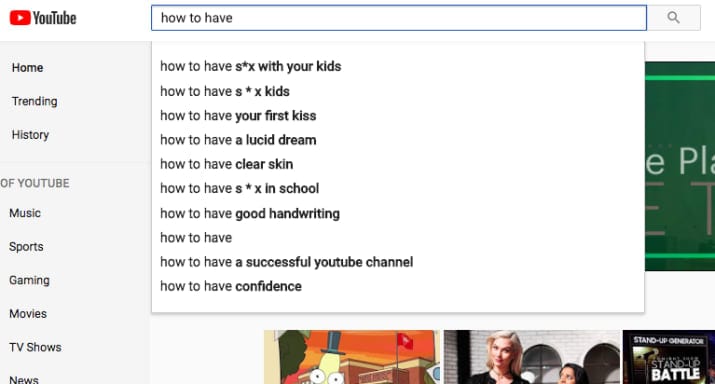 YouTube mentioned that it is investigating that how such phrases cropped in the first place and that it has removed such autocomplete results.

Apparently, it does not seem that the recommendations are indications of the many videos on the streaming platform of YouTube rather it’s been ventured that the autocomplete results may have been a part of some planned campaign by trolls.

Google earlier noticed and informed that its autocomplete prediction algorithm considers the most popular search queries and surfaces them as suggestions while users start to type something in the search bar. Google added that a bunch of malicious individuals could have jumbled up the words together and entered it multiple time the reason why it surfaces when others use the site looking up “how to have…”.

Additionally, some videos that had children in it were found to have been receiving sexually explicit comments and posts. Their presence and YouTube’s inability to filter them out stressed significant advertisers to pull out of the campaign and to stop promoting or advertising their products on the Google-owned platform. These advertisers include Mars and Adidas.

Taming and making a huge platform like YouTube into abiding some policies is tough, however, it is necessary that the company should try to deal with such occurrences in best possible ways as fast as it could.

Presently, YouTube is engaged in investigating the pressing problem and intends to update the public on its findings.

19 hours ago Muhammad Bilal
We use cookies on our website to give you the most relevant experience by remembering your preferences and repeat visits. By clicking “Accept”, you consent to the use of ALL the cookies.
Do not sell my personal information.
Cookie SettingsAccept
Manage consent