There is not much to surprise about as Apple iPhone’s performance is not hidden from everyone, but the new product line of 2018 has something different which makes it perform the way better it used to be. Despite the taunts by Huawei and other manufacturers for keeping the things same, Apple still stands alone when it comes to performance and software.

The new 2018 iPhones are powered by 7nm Bionic A12 chips which integrated Apple’s 6 CPU cores with 4 GPU cores and a new neural network engine. As Apple said in an official statement, the performance of 2 cores of Bionic A12 CPU has been increased by 15% and the power consumption has been decreased by 40%, additionally the power consumption of 4 other cores is reduced by 50% and the GPU performance is increased by 50% coupled with 8X increase in AI performance. Apple said this before launching the new series of iPhone XS and XS Max.

Yesterday, AnTuTu has officially announced the performance score of iPhone XS Max which scored mind-boggling 372,106 points making it the best performing smartphone to date on AnTuTu.

The second most powerful device on AnTuTu benchmark was Xiaomi Blackshark which uses Snapdragon 845 SoC and built with 10nm process, the phone pulls 292,887 points. However, iPhone XS Max performance is 27% higher.

We still have to wait for Huawei Mate 20 Pro which uses HiSilicon Kirin 980 chip and built with the 7nm process also the phones running on Snapdragon 855 chip in order to conduct the real comparison of all updated smartphones. 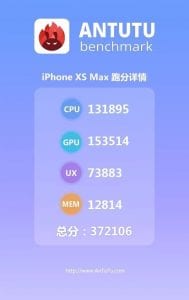 Apple’s claim for improving performance and reducing battery consumption has been contented, now it’s the time for Huawei to stand by with their claims, Huawei earlier said that its new HiSilicon Kirin 980 chipset has outperformed Apple’s A12 Bionic chipset.

The iPhone XS Max score is even higher than iPhone XS which pulled 363,525 points previously.

Now, would Huawei be able to beat Apple iPhone XS Max’s performance? We will let you know soon.

How Software Development Can Help Your Startup Succeed