Mark Zuckerberg announced in a Facebook post that from now on no agency specifically Russia’s Internet Research Agency (IRA) will be given permission to spread false rumors and misleading news to affect elections anywhere in the world.

To a comment on Facebook Zuckerberg said, “Yes — 2018 has important elections across the US, Mexico, India, Brazil, Pakistan, Hungary and many other countries. We’re working on rolling our AI tools out everywhere and in all these languages.” 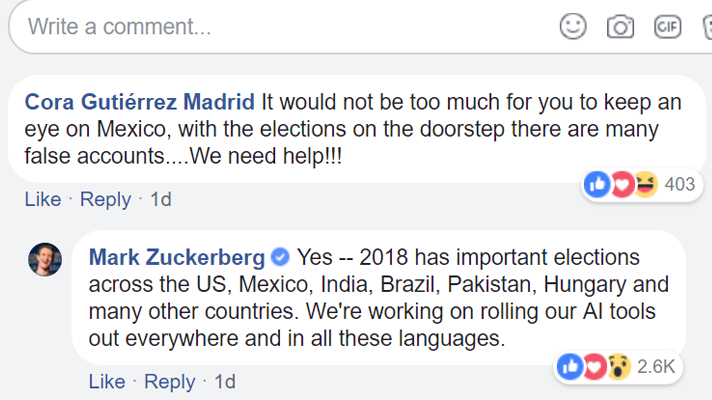 Zuckerberg said that in 2018, elections will be held in many countries including Pakistan and so Facebook will use its AI tools to provide foolproof security & transparency.

In the Facebook post, he said, “Today we’re taking an important step to protect the integrity of elections around the world by taking down more than 270 pages and accounts operated by a Russian organization called the Internet Research Agency (IRA). Most of our actions against the IRA to date have been to prevent them from interfering in foreign elections. This update is about taking down their pages targeting people living in Russia. This Russian agency has repeatedly acted deceptively and tried to manipulate people in the US, Europe, and Russia — and we don’t want them on Facebook anywhere in the world.”

He informed the people that Facebook is upgrading its security system. It will use Artificial Intelligence to filter out those Facebook posts that spread false news. Also, fake accounts will be deleted.

During the USA elections, IRA used fake accounts to spread misinformation & create propaganda. This time around, Facebook is ready. The company has improved its techniques that will ensure that no state or political party influences elections through the social media channel. He also informed that Facebook is increasingly investing in its security department. The company has 15000 people working on the security of the social media app.

He said, “We have also significantly increased our investment in security. We now have about 15,000 people working on security and content review. We’ll have more than 20,000 by the end of this year.”

What Is the Veneers Price?

Tips To Use Online Storyboarding Tool For Your Business

What Do You Know About Geofencing? A Guide to Geofences Using Wondershare FamiSafe