After the Galaxy S21 FE, this year’s top smartphones from Samsung are due to be launched. A leak, which apparently comes from an internal presentation by the manufacturer, now reveals most of the specifications of the new top model Samsung Galaxy S22 Ultra. The YouTuber Zaryab Khan has published a picture on which various specifications for the Samsung Galaxy S22 Ultra are named, which apparently comes from a presentation used by network operators or other partners of Samsung. Then the top model of the Galaxy S22 lineup is shown under its internal code name “B0”.

Full equipment all around

According to the information, the new high-end model with the angular design in the style of the Galaxy Note series will have a 6.8-inch Dynamic AMOLED 2X display with a QHD + resolution of 3080×1440 pixels. The panel has a circular cutout in the middle below the upper edge for the front camera, is slightly curved on the sides and can of course also be operated with a pen.

According to the specsheet, under the hood is the new Samsung Exynos 2200 Octacore SoC, which, according to earlier reports, uses the ARMv9 architecture and has at least one ARM Cortex-X2 high-end code, which Samsung in cooperation with AMD with an RDNA2 based graphics unit combined. The chip is manufactured by Samsung itself on a 4-nanometer scale. The main memory is eight or 12 gigabytes, depending on the model, while the internal flash memory is 128, 256 or 512 gigabytes. There is also a 5000mAh battery, which, according to previous reports, can be charged quickly with up to 45 watts. Of course, as mentioned, there is also a slot for the S-Pen so that the pressure-sensitive input pen can always be carried with you. 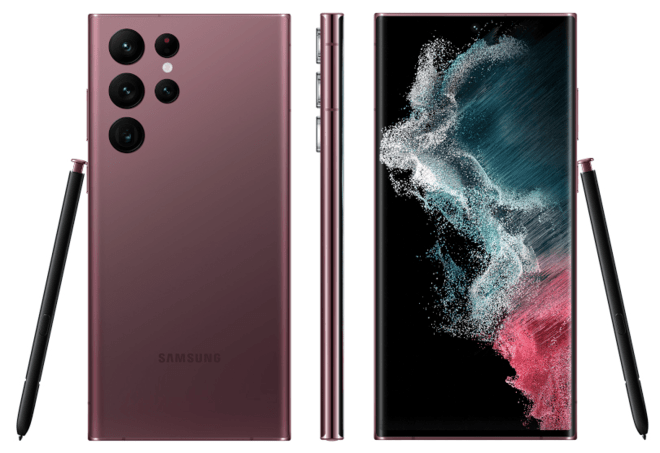 Samsung is apparently upgrading the cameras and installing a 108-megapixel sensor with optical image stabilizer and phase detection autofocus as well as an F / 1.8 aperture in the main camera, which is now covered by largely scratch-resistant Gorlla Glass Victus which he should capture few reflections and an overall clearer picture. Samsung speaks of a “Super Clear Lense”. There is also a 12-megapixel camera for ultra-wide-angle shots, which offers dual-pixel autofocus and an F / 2.2 aperture. In addition, two 10-megapixel cameras with DP-AF and even an optical image stabilizer implemented in hardware are integrated. These two cameras each offer zoom levels with three and ten times magnification and are obviously intended to give the S22 Ultra enormous telephoto zoom capabilities. According to the leak, the Galaxy S22 Ultra will be available in the colors Phantom Black, Phantom White, Green and Burgundy Red. In view of the good features, the new top smartphone is likely to be anything but a bargain, so base prices from around 1000 euros can be assumed.

The most important features of fleet management technology

Galaxy A53 5G receives stable Android 13 updates in the US

Microsoft Is Planning a Super App Just Like WeChat In China

Microsoft Confirms 10-year Deal For Call of Duty On PlayStation