According to the AnTuTu benchmark score Qualcomm has tested its new Snapdragon 8150 SoC for high-end mobiles which is scheduled to launch later this year. Surprisingly, the new 7nm process built SoC has surpassed the previous and the fastest SoCs by other manufacturers including Kirin 980 by Huawei and A12 Bionic by Apple.

The top two in the race are still Apple’s A12 Bionic and Huawei’s Kirin 980 which has already provided next-generation processing performance and speeds, Samsung has also announced recently its Exynos 9820 SoC with NPU which is yet another powerful SoC succeeding the previous Exynos 9810.

Similar to Exynos 9820 the platform also using a dedicated Neural Processing Unit (NPU) for AI-related tasks. The benchmark shows the score of 362,292 points on AnTuTu which indicates an improvement of almost 65,000 points as the predecessor Snapdragon 845 never crossed 300,000 points.

Huawei’s Kirin 980 earlier scored 315,000 points and Apple A12 Bionic the fastest SoC to date scored 353,210 points. This test makes the Snapdragon 8150 SoC being the fastest if the results have no discrepancies.

The score sheet was posted on Weibo account by the leakster but it doesn’t confirm the authenticity of the score as he claims that Snapdragon 8150 comes with unusual core configuration 1+3+4 which means 1-high performance, 4-medium performance, and 4-energy efficient cores, this report contradicts earlier reports about the new Snapdragon. So this report should be taken as a grain of salt because we still have to confirm this from official sources. 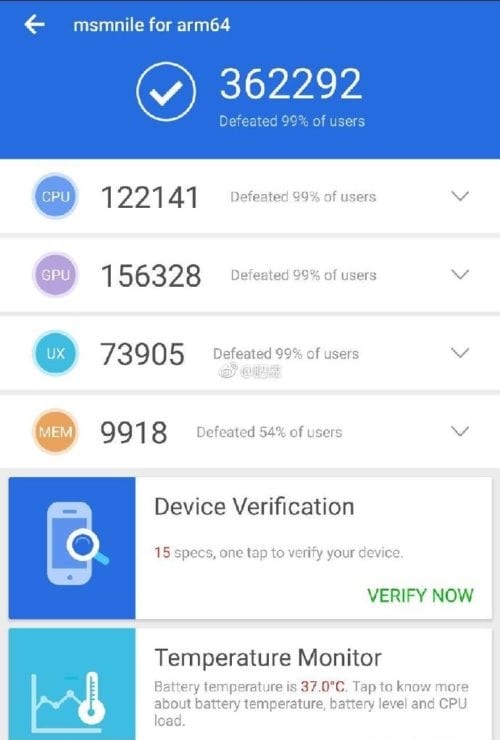