Samsung has recently released a teaser to respond to battery Rumors and confirmed that it is coming with 4000mAh battery. The previous leaks have told us much about Samsung Galaxy Note 9 and its features it seems now almost nothing reaming what the phone offers. But today a poster appeared for pre-order in Indonesia which tells us the exact price of the upcoming phone.

You will be shocked by the price, it seems the most expensive phone on earth by looking at the figures in IDR, the phone actually costs roughly $940 which translates to IDR 13.5 million for 128GB variant, the cost of 512GB variant is little over $1215 and IDR 17.5 million. 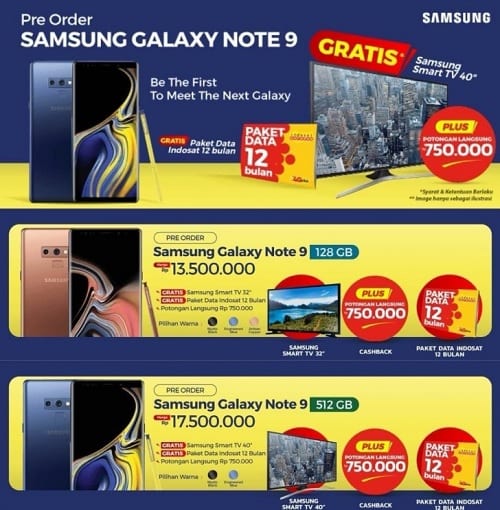 The Samsung Galaxy Note 9 will come in three color variants including Blue, Copper, and Black in the Asian market. Samsung also offers freebies like Samsung Smart TV or up to IDR 750,000 cash back or free data plan for 12 months.

Famous mobile leaker also sent leaks about the prices and leaks which suggested that the device will cost between €1050 to €12,50 in Europe, and Blue Note 9 will have yellow S pen as we reported in leaked poster earlier this month.

10 hours ago Muhammad Bilal
We use cookies on our website to give you the most relevant experience by remembering your preferences and repeat visits. By clicking “Accept”, you consent to the use of ALL the cookies.
Do not sell my personal information.
Cookie SettingsAccept
Manage consent