The Galaxy Note 9 codenamed SM-N960F will have whopping 8GB RAM and powered by Android 8.1.0, the chip is the most powerful of Samsung’s homegrown chips the Exynos 9815 Octa-core. The company has also started working on the latest Exynos 9820 chips equip with 5G technology. As for now, Galaxy Note 9 will be equipped with the most powerful chip to date.

However, the previous Exynos 9810 chip was also quite powerful which powers Galaxy S9 and S9 plus, the chip had a score 5162 points in the single core and 10,704 points in multi-core tests.

In earlier leaks, the Galaxy Note 9 with codename ‘SM-960U’ also appeared on Geekbench, the variant supposed to carry a Snapdragon 845 chip along with 6GB RAM. It can be assumed that Samsung will launch two variants of the device, Samsung has been launching two different variants in many of its smartphones now to grab the wider market. 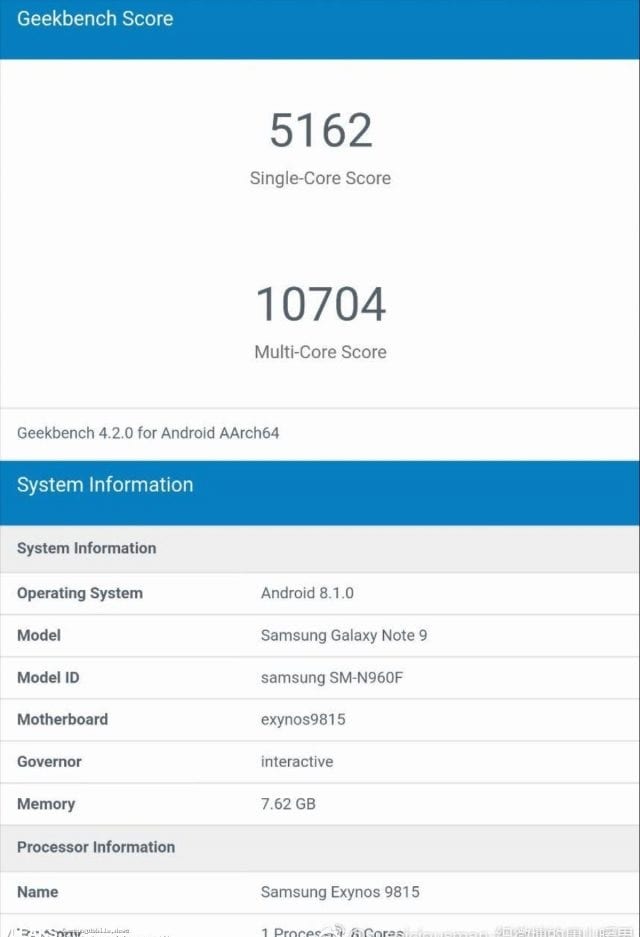 Samsung has not given any details about the device yet, so most the reports are just speculations, as far as the specifications are concerned, Samsung Galaxy Note 9 will have more or less the same specifications as mentioned above. The price of the phone would be premium as well, Samsung Galaxy Note 8 was considered the upscale phone above $900 so this phone is expected to come with the same price tag, however, some reports argue that it will be $100 less from the predecessor.