As the final of the third edition of Pakistan Super League has approached, the city of lights along with many others have geared up for the event. The two most famous and renown ride service providers—Uber and Careem have also introduced their FREE RIDES for the event.

Pakistan Super League as we all know has reached its finale, which is to be hosted in Karachi today. The provincial capital has been all dolled up for welcoming the national plus the international players. The qualifying teams Islamabad United and Peshawar Zalmi are to compete against each other in the final battle of the league.

The National Stadium of Karachi has been undergoing renovation and needed preparations were being done at the stadium for making it perfect for hosting the grand finale match.

Uber has been the official transport partner of the PSL during the entire league and has constantly been offering one or the other offer for the commuters who are also PSL fans. Today flowing with the tide Uber has brought its free ride offer for the ones willing to travel to see the final match to the national stadium, Karachi. 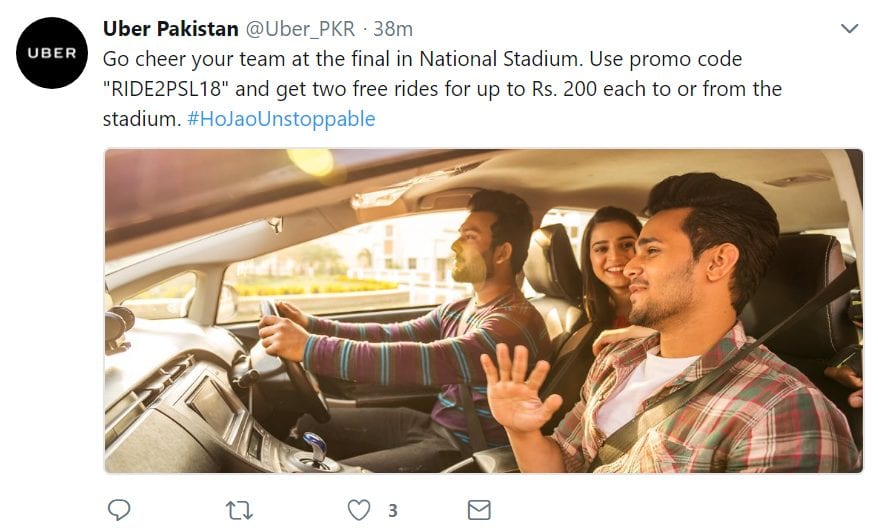 The promo code for the offer is RIDE2PSL18. Using the code two rides could be availed to or from the match venue. The ride cost should not be more than Rs 200.

Similarly, Careem also introduced its exclusive offer for the PSL 3 final. The promo code to avail the offer is FREEFINAL and two rides could be taken via this promo code may the ride be towards the match destination or from there. Also, Careem has brought a chance for the ride-service consumers to win a trip to Dubai.

Use promo: FREEFINAL and take 2 free rides to/from the designated drop off locations around National Stadium & also get a chance to win a trip to Dubai!

Considering the present situation in the city of Karachi I believe the offers introduced by both the ride-hailing companies are good and many PSL fans would be making use of them. The whole city is excited and ready to go and watch the final match and this is an indication that there would be traffic jams and a chaotic situation in the city. To avoid all the hassle people would for sure be looking for alternate ride options and so has been provided by Uber and Careem.

More Read: Half PSL 4 Would be Hosted in Pakistan—Chairman PCB Promised

19 hours ago Yasir Zeb
We use cookies on our website to give you the most relevant experience by remembering your preferences and repeat visits. By clicking “Accept”, you consent to the use of ALL the cookies.
Do not sell my personal information.
Cookie SettingsAccept
Manage consent