On Tuesday, WhatsApp received an update introducing a bunch of some notable features. The added features include easier ways of recording longer voice messages and a picture-in-picture mode for watching videos on YouTube.

WhatsApp voice message recording feature has enjoyed the most loved and popular feature status on the chat platform, however recording a particularly long audio chunk could get annoying as the microphone button needs to be kept pressed until the audio message is completely recorded if one wants to send the audio message in one go.

So, from today onwards WhatsApp has launched Locked Recordings feature. Now if one wants to send an audio message then just press on the mic button for starting the recording, the moment the mic button is pressed a padlock UI element would soon come up along the right-hand side of the chat window screen allowing one to slide up and lock the recording session on its own without the need of constantly keeping one’s finger on the mic button. 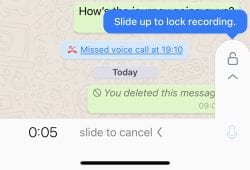 When one is done recording the send button is to be tapped and the audio message would then be on its way to the desired recipient.

When making a locked recording one cannot view media in a thread unless some 3D Touch action is incorporated neither navigation to another chat would be possible.

The other significant addition in the WhatsApp version 2.17.81 is to view the YouTube video links sent in chats right within the WhatsApp chat window. Picture-in-picture allows one to navigate other chats while watching the YouTube videos. At the time text is being written PiP seems not to be working for all the users who have updated their WhatsApp, implying that the company might still be working on rolling out the feature more extensively behind the scenes.