Android 8.1’s latest version has brought a considerable number of improvements, UI alterations, and features. Some features are minimal whereas some are important. One new feature that is anticipated is of SMS messaging from Chromebook. This feature would be named as “SMS Connect”. 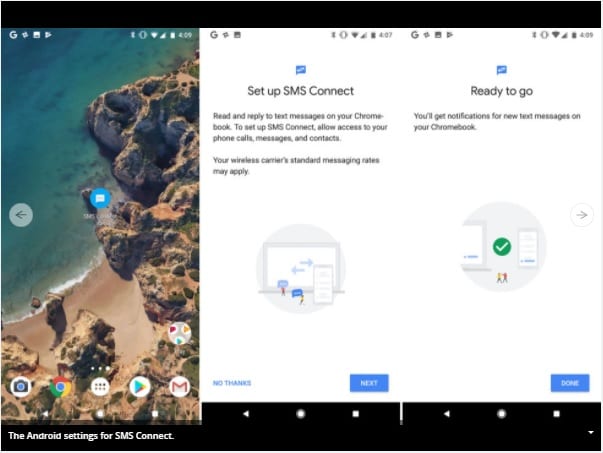 This integration was discovered by Ars Technica and is found in Android 8.1 Beta. The app has got no shortcut from the app drawer which means it has got no homescreen icon, it is accessible through the activity browser from where a setup screen for “SMS Connect” can be obtained. The feature would provide the facility to users to read and respond to text messages on their respective Chromebook.

As the word indicates that initially, the feature would only be available for the Chromebooks. Maybe later it may find its way to the Chrome browser so that it could be used for various other platforms. Nothing is ready at the moment. But the screens accessed by Ars Technica are very much similar to a setup screen. Perhaps it would be displayed when the Android Messages app would be synchronized with notification.

The new feature would be needing “com.google.feature.PIXEL_EXPERIENCE” so that it may work. This suggests that at first, it would exclusively be available only for the Pixel devices.

SMS Connect could prove another beneficial feature introduced by Android. With all the technology firms competing to survive and entertain their users with something new, this feature would for sure be an addition to the something new and exciting list.

22 hours ago Yasir Zeb
We use cookies on our website to give you the most relevant experience by remembering your preferences and repeat visits. By clicking “Accept”, you consent to the use of ALL the cookies.
Do not sell my personal information.
Cookie SettingsAccept
Manage consent