Facebook is shutting down its Friend List Feeds feature. The customized News Feeds that show only posts from a Facebook group or users of one’s choice. This news was revealed in a message posted in the Facebook application.

The News Feeds feature used to permit the users to scroll down the posts of their defined friend lists—such as family, neighbours, work, colleagues, industry peers etc.  This resulted in a much more customized version of the social networking application—where one could catch up on the updates without any cluttering from the Facebook Pages, acquaintances, post or those from friends one is not interested in following.

For using Friend List Feeds, one would first need to make a friend list on Facebook—these friend lists to be clear then could not be discarded.

So, if one wants to boost about some personal achievement or professional success to their family or work colleagues then that is still possible.

Facebook’s message regarding the feeds’ shutdown mentions to not worry as one could continue to create, edit and share stuff with the friend lists. The thing that is being shut down is the Friend List Feeds—which is a way to read these specific people’s updates in their own distinct News Feeds within the Facebook App. 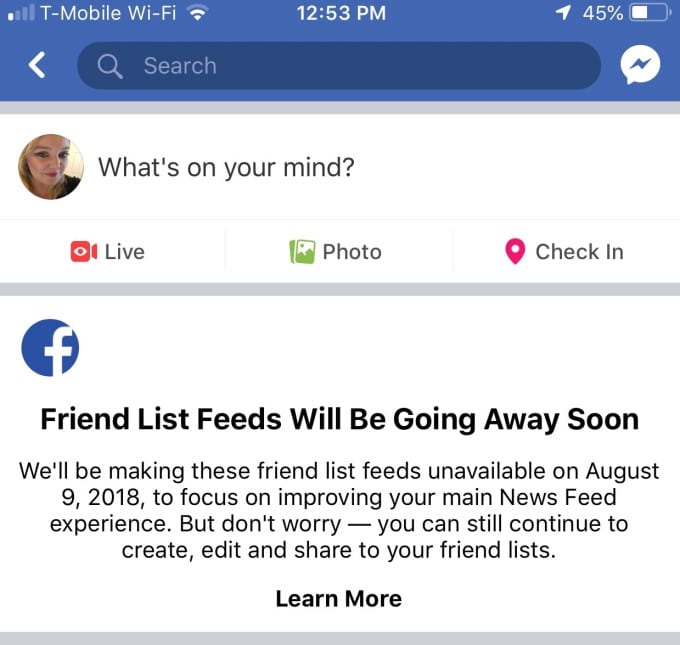 For accessing the feature there is a section called “Feeds” in the Facebook app that would be listing all the available feeds, based on the friend lists.

Friend Lists have been on Facebook for quite some years, however, the original version of the application needed a lot of more manual efforts. One has to make a list, then its title, then the hassle of scrolling the complete friend list one-by-one for determining who to add. And as new Facebook friends are added then again one would need to add them to the suitable list.

Facebook in 2011 said that ninety-five per cent of the users have not even made a single list using this feature. For making things easier Facebook introduced “smart lists”—where it started to auto-group friend into lists from saving the users of doing any efforts. But, even the smart lists were not that hit, people rarely used the “friend list feeds” feature—perhaps even some users have no idea that such feature existed.

As per the Facebook’s message, the Friend List Feed feature was to shut down on the 9th of August 2018. However, the feature is still available, to this Facebook justified that it could be because of an older version of the app.

Google is Stopping the December Update to Reach Google Pixel 6

Samsung Rolls Out One UI 4.0 Beta to Galaxy S10

19 hours ago Yasir Zeb
We use cookies on our website to give you the most relevant experience by remembering your preferences and repeat visits. By clicking “Accept”, you consent to the use of ALL the cookies.
Do not sell my personal information.
Cookie SettingsAccept
Manage consent