The question whether Google AdSense pays you more money or Google AdX normally comes in when a publisher has started off its journey for quite a few years because the beginners only think about how to get verified AdSense account or how to increase AdSense earnings,  or even the best AdSense alternative to increase revenues.

In this article, I will try to cover everything about AdSense and AdX so you can decide in the end which is better to use, when to use and where to use, Google AdSense Earnings Vs Google AdX Earnings must have one win over another as it sounds.

But there is a different story behind it, these are actually two different job positions which pay differently requires the different set of skills, working hours and level of responsibility. I think you got the point now, don’t you?

Difference Between AdSense and AdX

However, Google AdSense was born in June 2003 which came up with automated display Ads advertising equally beneficial for Advertisers and Publishers; AdSense has been going through productive changes since then.

The major difference between AdSense and AdX is the type of network, AdSense in an Ad network whereas AdX is an Ad Exchange network

AdSense is an automated Ad serving network in which mostly automated ads by Google are served, However, AdX is a network where different ad networks exchange ads and the preferred one is served on publisher’s site. It provides more control on what ads should serve on a publisher’s website.

AdSense, on the other hand, do not provide control over ads being served on publisher’s site except blocking some ads, blocking domains, blocking advertiser’s account and blocking third-party networks. But should you block any domains, ad networks or ads in AdSense in another blog post itself.

Advertisers buy ads from Google AdWords or any third party networks which then serves on AdSense publisher account.

AdX is a standalone Ad Exchange service provider created especially for advanced marketers and publishers with programmatic real-time bidding (RTB) which offers gigantic inventory to a large number of advertisers and managed through trade desk type of service. It is simply an auction style rather than buy it now.

The AdX inventory has tons of third-party ad networks and popular brands and media names. Another distinctive difference between AdX and AdSense is that AdSense allow users to place the maximum on 3 ad units on one page whereas AdX allows up to 5 Ad units, so if the AdSense has filled 3 ads the rest of two would be filled by AdX.

Google has also explained the differences between the two in the image below; 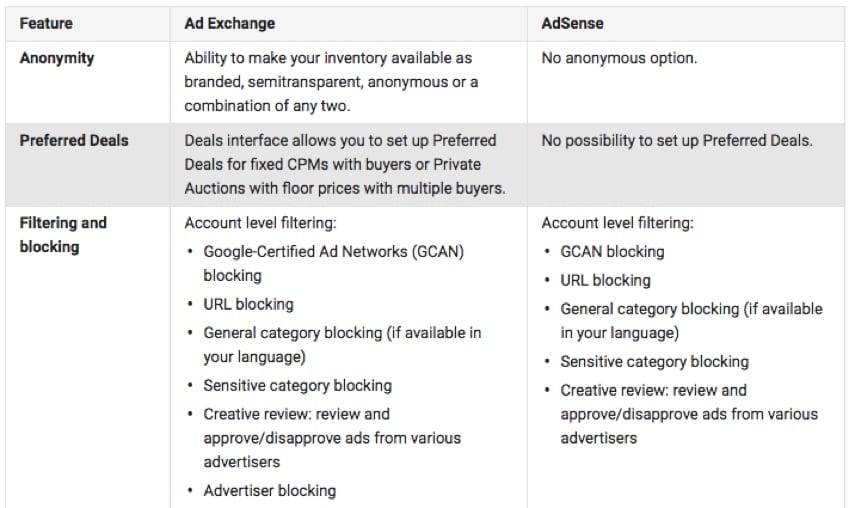 So that was the core difference between the two networks, now what about these differences? How they impact earnings and what about AdSense Earnings Vs AdX earnings? I will explain that one by one.

As I said earlier, AdSense and AdX are two different jobs, have different payouts, require the different set of skills and have different responsibilities so you cannot directly compare them because they both are different.

AdSense earnings are automated by Google itself; Google provides a playing field for advertisers and other ad networks by offering them the minimum cost for ad impressions, but this also means that publishers may not be able to get maximum revenue for their ad units because they cannot set the floor prices. But AdSense on one side and AdWords on the other is for most of the inexperienced web owners and advertisers, they do nothing just a few tweaks and Google manages everything for them in order to yield best results for both.

So if you are a web owner, small business, small publisher, Google AdSense is the best option for you and it will earn you the most in a best possible way.

Earning with AdX is much more complicated as compared to AdSense, in AdSense you just need to add ad units to your website and watch how it earns money for you, or you may just add little tweaks such as doing experiments Ad fill percentage, Text, images or both types of ads, blocking advertisers or categories (which is not a good idea by the way) and some more tweaks.

Earnings with AdX would require more skills and strong knowledge, first of your entire website needs to have at least 500,000 page views per month to qualify for the AdX Network, also you have to be a Google Certified Partner to get access to AdX. If you are far behind that reach, then stop thinking about AdX and concentrate on your core production.

Even if you get hold of AdX you still need a lot of homework, understanding and skills to operate it effectively that could make you some extra bucks.

AdX has huge inventory consisting of smaller websites through networks like AdSense and hundreds of other display inventory networks as well. Google like to exchange display inventory with big websites which have millions of visitors because they have to sell impressions.

Having AdX as a publisher has some golden nuggets, for instance, you as a publisher would be able to set floor prices and control who bids on available ad units in exchange. There are tons of buyers through different types of auctions including Open Auction, Private Auction or Preferred Deal.

The open auction is available to all publishers on AdX and all advertisers, the more the bidders are the higher the price of the ads is. According to Google Open Auction tends to generate the most revenue because it is available to all.

The private auction, on the other hand, allow publishers to open their action for a selected group of advertisers, in private auctions publishers are not anonymous as they are in the open auction. They brag about who they are and attract more bidders to their auctions.

If the publisher is unable to price the inventory according to the market demand or set the prices too high, or low or could close the deals, then they might end up making a lot less money than AdSense along would have generated for them.

So basically, large advertisers who wish to advertise in a large marketplace with a lot of control over ads normally turn to AdX, in order to be successful in their marketplace, trained and skilled advertisers and markets manage their campaigns and bids on the daily basis.

Similar to publisher use the representative to offer the inventory on the site, AdX advertisers partner with trading desk to place the ads inside the inventory. Advertisers might pay higher prices for premium inventory.

If you are an advertiser think of the level of your ads visibility if they emerge on the sites like New York Times, CNN, BBC, CNBC, Verge and others.

It really depends on the business needs, budget and expertise, however, I should summarize the answer this way, AdSense pay more to small and medium publishers because it provides a ground for low to medium budget advertisers and an opportunity to for all the websites to earn from displaying ads on their sites.

Similarly, AdX pay more to large publishers, it is more costly, more complicated and requires expert management, it has the larger inventory with more control over. AdX has a lot of control features to offer both advertisers and publishers, AdX can set minimum prices for different ad positions on the site, it allows preferred deals to a large base of advertisers, it allows private auctions.

If AdX is managed properly it can yield better revenues but only for large publishers, I would recommend small and medium publishers should stay away from the platform for a while until they become a premium publisher.

Internet marketing firm Adnimation has analyzed over 400 websites and concluded that Google AdX will pay more to publishers than Google AdSense, however, this is always subjective and requires deep analysis.

Some other marketers including monetizemore, ezoic, and Adngin claim that they have witnessed 30% more revenue with Adx when comparing AdSense Earnings Vs AdX Earnings. Considering the fact that AdSense is still more popular than AdX because its simple automated and for everyone AdX can only be available for large advertisers and large publishers.

1 day ago Nicole Craig
We use cookies on our website to give you the most relevant experience by remembering your preferences and repeat visits. By clicking “Accept”, you consent to the use of ALL the cookies.
Do not sell my personal information.
Cookie SettingsAccept
Manage consent