Skip to content
Home » Technology » Mobiles » HTC U11 Plus leaked specifications with Android 8.0

After HTC U11 this leaked HTC device is most probably HTC U11 which just appeared on the website with specifications.

According to the leaked specifications, the HTC U11 plus will be carrying a Snapdragon 835 chip along with 4GB RAM and latest Android Oreo 8.0.0.

The HTC device specifications don’t necessarily say its 100% HTC U11 plus, it might be a new device, but rumors a few days ago suggest that HTC would be unveiling HTC U11 plus on their event which is scheduled for November 2.

The image below tells you the single-core score and the multi-core score. The predecessor HTC U11 has almost the same specifications in terms of chipset and RAM, However, U11 has 4GB and 6GB variants, the 6GB variant is being sold in various markets such as U.S. so you might expect variations in RAM for the newer model as well.

HTC U11 also had a gimmick when it was launched, it was equipped with sensors on the edges which enabled selfie-taking by squeezing the phone.

Still, to watch what new features HTC U11 Plus would be carrying in order to attract more users, it might have something new to offer because without any changes the new phone might be proved a waste of energy for HTC. 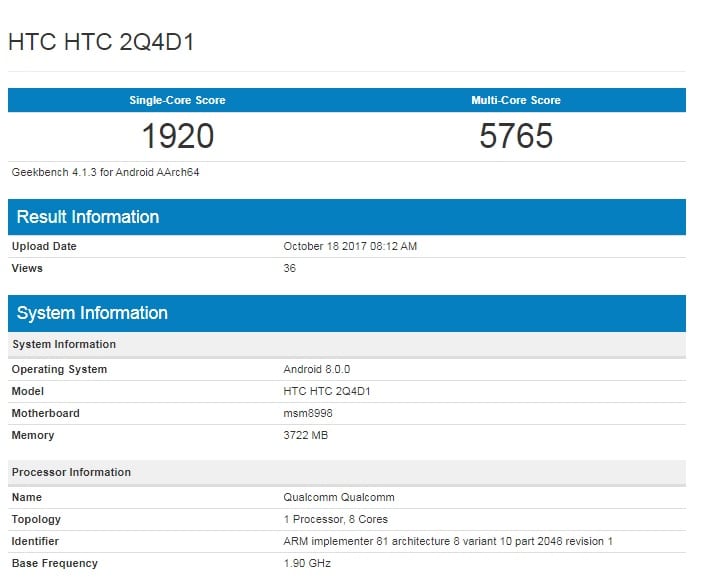 Apple iPhone 15 would be the first supporting USB-C: Kuo

Spotify Offers Free premium account as an incentive for employees

The Witcher 3: Next Gen Edition is slated for later this year

20 hours ago Ron Harold
We use cookies on our website to give you the most relevant experience by remembering your preferences and repeat visits. By clicking “Accept”, you consent to the use of ALL the cookies.
Do not sell my personal information.
Cookie SettingsAccept
Manage consent