Smartphones are powered by the SoCs they are the brains of the computers, the faster the brain’s processing speed the better the user experience while operating the smartphone. You must be aware of different chip makers including Qualcomm which manufactures Snapdragon chip the most popular inexpensive handsets. After that MediaTek takes control of the other flagships, many popular handsets including Oppo, Huawei, Xiaomi, and others are equipped with MediaTek chips, the Taiwanese Chip maker is strong in SoC market.

But recently, the company has faced a decline in their overall market share and sales, during the third quarter of 2017 the company’s 18% market share was declined to 14%. The top SoC manufactured by the company Helio X30 wasn’t successful in 2017. The company has planned to abandon the production of Helio X and looking for other options now.

In order to regain the market share and push the sales of chipsets in 2018, the Taiwanese manufacturer has made its mind to specifically focus the mid-range segment which is catered by its P series of SoC. According to the new leaks, the company is currently working on two new chips dubbed Helio P40 and Helio P70. These SoCs built at 12nm TSMC are probably launching during the second quarter of 2018. The company is blending the high-end segment with the mid-range grade which could boost their sales in 2018.

The Helio P40 is not new in this field, but it has been up upgraded, according to the leaks the new Helio P40 chipset will have Octa-Core including Four 2.0Ghz A73 cores and Four 2.0Ghz A53 cores.

The GPU is powered by Mali-G72 MP2 clocked at 700MHz. The chip will support up to 32 MP cameras and up to 8GB of RAM LPDDR4X up to 1866Mhz, eMMC 5.1 and UFS 2.1. Another interesting part is the chip will also support AI functionality with Tensor Flow support. This will be a powerful chipset for 2018 handsets, the Helio P40 will also bring LTE cat.7 support.

While Helio P70 has enough to gain attention, the Helio P70 would hijack the show, probably ready to be competing Snapdragon 660 in 2018. According to the leaks, the chip is bringing Four 2.5GHz A73 cores and Four 2.0GHz A53 cores along with it. The key difference between the P40 and P70 is the GPU, Although, the core speeds are higher in P70 the chipset will deliver more advanced graphics because of quad-core Mali-G72 GPU which is clocked at 800Mhz. 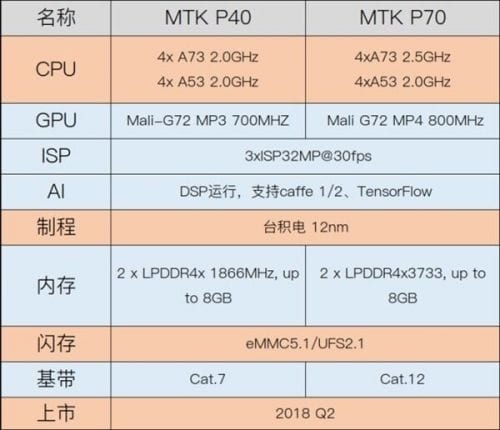 The Helio P70 will be supporting up to 8GB of RAM LPDDR4X, it has the same eMMC 5.1 and UFC 2.1 storage. The Helio P70 is expected to come with expensive smartphones though. The most favorable brands using these chips would be Oppo, Xiaomi, Vivo, and Gionee along with other Chinese brands.

Some reports also suggest that Chinese Smartphone makers mulling to feature its next-generation smartphones with Qualcomm’s Snapdragon chips. But if MediaTek is producing the chips like P40 and P70, nothing can be said as yet. It would be interesting to see which brands will be using MediaTek in their upcoming smartphones and how it performs on the phones.